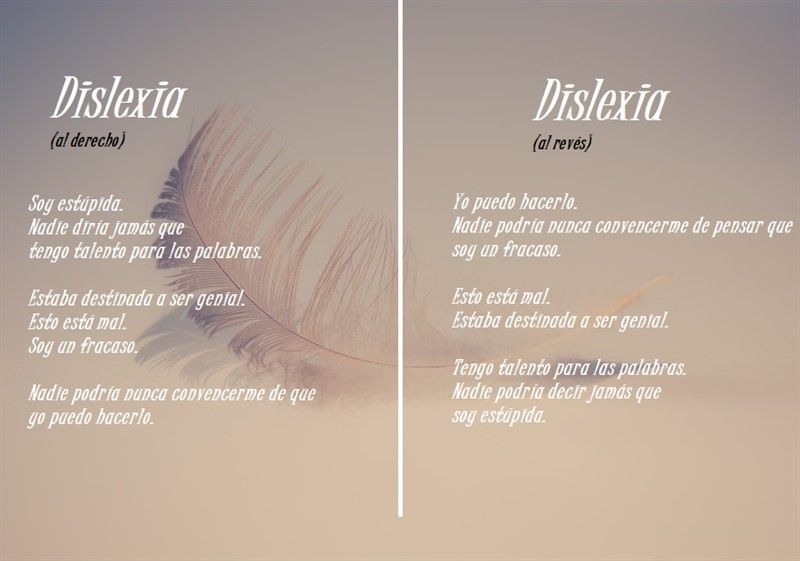 Dyslexia, that's the name of the poem by a 10-year-old girl who has earned Twitter recognition after her teacher shared the writing on the social network.

Jane Broadis is a 6th grade teacher at Christ School Chorleywood, in Watford, United Kingdom, and decided to share the poem of one of her students on social networks after feeling moved by the theme: dyslexia.

In the tweet, Broadis explained that her class was learning about poems that could be read both upside down and upside down, producing a different meaning. When the teacher asked her students to write a poem, she did not expect to find this girl's:

On first reading, the young woman's poem recounts the criticism that people with dyslexia have to endure, including comments like “I am stupid” or “I am a failure”. But it is towards the end of it, when the author asks us to read it again from bottom to top, when we realize that the poem is actually a writing of positivism and acceptance: “No one can ever convince me that I am a failure. ”, “nobody will be able to say that I am stupid”.

The tweet had a great impact among users of the social network and achieved more than 47.000 retweets and 159.000 likes in a matter of hours.

After the success, Jane Broadis offered a short interview to the BBC in which she explained that the subject of dyslexia is something that they had dealt with in class since there were students with learning difficulties at school. And she added: " The girl who wrote this poem is not dyslexic, but she is incredibly thoughtful and sensitive, and there are also people in her class who have difficulty reading and writing.”

Dyslexia is a neurological condition caused by different wiring of the brain. It is a specific learning difficulty, which results in problems with certain learning skills such as reading or writing. Unlike a learning disability, in the case of dyslexia intelligence is not affected.